We live in a time when personal happiness has become a non-negotiable priority; when imagining and choosing the story one wants to live takes precedence over narrow notions of obligation. Using symbolism to tell their ideas, today’s new generation of contemporary visual artists are not holding back in their ambitious experimentation and burgeoning creativity. Building successful careers in the creative field is just one of the ways the younger generation defies the odds – they express themselves artistically in unimaginable ways, use social media to promote their talents to the world, and secure a representation in the process. Fueled by their personal experiences, including struggles with mental illness, childhood and relationships, these artists use their work as a visual bridge to channel their emotions into pieces to share with an audience.

As a teenager, Prashanth C from Bengaluru spent hours creating fan-designed posters for regional actors. Later, he found his niche in fashion retouching and started working to make it a full-time career, which he has been pursuing for seven years now.

But, the last two years have given the visual artist time to start working on his personal projects, shifting his interest to surrealism and collage art – in what he describes as an endless canvas where he has the freedom to play with creativity. “I studied the history of the Dada movement (an artistic movement formed during World War I in Zurich as a negative reaction to the horrors and madness of war) and the Surrealist Manifestos. The neo-expressionist artist Jean-Michel Basquiat, who changed the face of contemporary art, was a huge source of inspiration.

Using surrealism as a tool helped Prashanth ask an overriding question, “why not?”. “Why shouldn’t one object sit with another in a painting, or why shouldn’t a crayon I’m painting be taller than the child holding it?” It helps me face and perceive the absurdity of life itself. It became an important medium for me after losing my dad and sister to Covid. There is no inherent logic in life or death; that’s what we do with it. So why must art alone intrinsically be sentient? ” he says.

He agrees with Oscar Wilde when he says that “all art is utterly useless” and perhaps “the only excuse for doing something useless is that one intensely admires it”.

“There is no inherent logic in life or death; that’s what we do with it. So why must art alone intrinsically be sentient? »

THE POWER OF IMAGING

Hailing from Bhilai, Chhatisgarh, and residing in Bengaluru, visual artist and content creator Gourab Pal uses perspective techniques to create a realistic sense of depth and present disorienting imagery. Although he was trained as an engineer, Pal wanted to break free. So he started to explore the visual medium with photography. The creative work he immerses himself in, where he breathes new life into discarded images that expose his innermost thoughts, fears and hopes, is inspired by artists like Ben Zank, Geloy Concepcion and Tom Williamson, among a host of artists. ‘others. 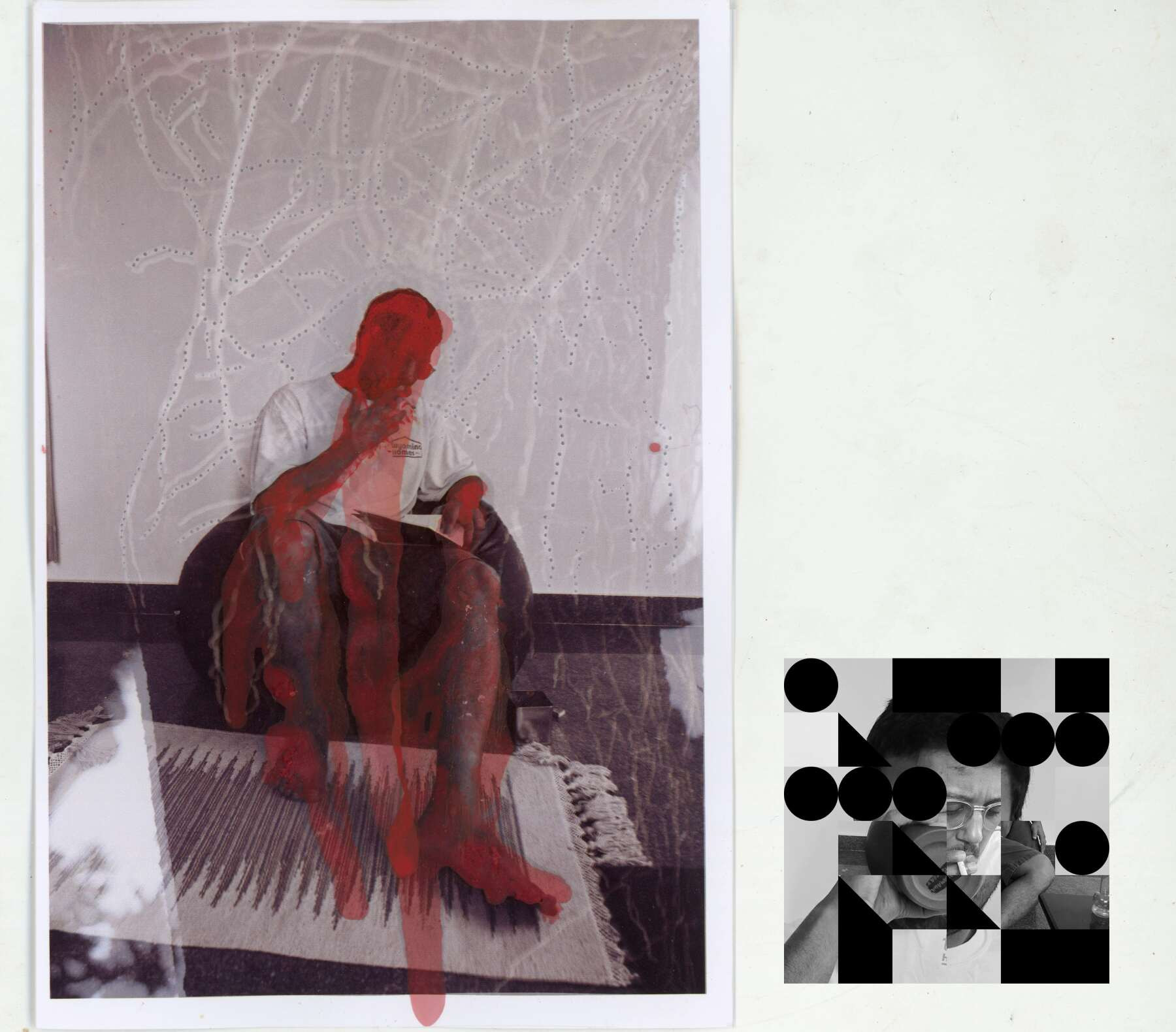 “I’ve always believed in learning by creating. So I started experimenting with my art in lockdown when a friend of mine introduced me to code processing and creative coding. It sounded quite interesting,” he says. At the time, it was also introduced to artists working primarily in generative art, which draws inspiration from modern art, particularly pop art which makes heavy use of ordered geometric patterns, such as Tim Rodenbroker, Daniel Shiffman and other encoders.

As social media gives way to information overload, Pal thinks most people now decide what to read based on the images they see. “It’s the visuals that help viewers decide if they want to read words. The responsibility of image creators is therefore enormous at the moment. I think our role is not only to reflect the times but also to have a position,” he says.

Serendipity is important to Jessie Sohpaul, whose work is heavily influenced by her experience as a first generation born into a Punjabi immigrant family and raised in Canada. Meeting new people, entering a new gallery or simply coming across a new magazine at the bookstore can give her new ideas. “It became difficult during the pandemic, so I actively made sure to dig deeper into my book collection as well as the online digital archive for research and inspiration,” he says. Sohpaul tends to use black and white as colors for experimentation. Her current medium is felt and acrylic paint. 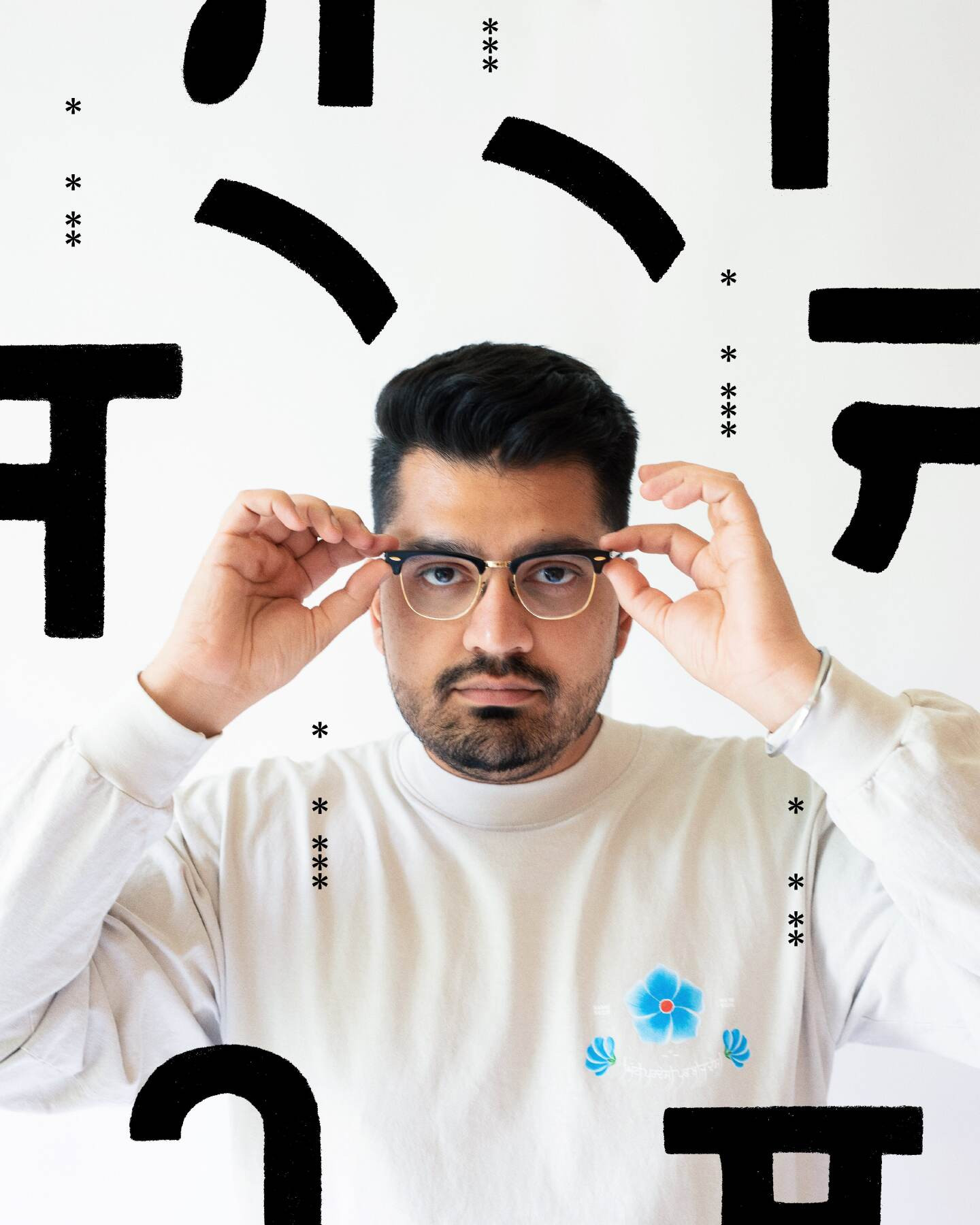 Sohpaul actively documents the South Asian experience through audiovisual and typographic media and finds himself preoccupied with the idea of ​​a future nostalgia.

“I draw my inspiration from graphic design, street art, streetwear, and of course, my roots. Street art has this crudeness and audacity. And when mixed with a “do what you can with what you have” attitude, you get some great results. I therefore strive to integrate this approach into my process. And I try to think of the context in which my work will live. What changes if it’s in a gallery, on an outside wall or on a T-shirt, and how would the space impact the work? »

“What changes if it’s in a gallery, on a wall outside or on a T-shirt, and how would the space impact the work?”

Mumbai-born graphic designer Anushka Tendolkar lives by the phrase “A jack-of-all-trades is a master of nothing, but often better than a master of one” and has always made an effort never to be too comfortable with a single skill or medium. “I started my creative journey with basic pencil and paper, which evolved into 2D digital illustrations which then evolved into 3D illustrations as well,” she says. 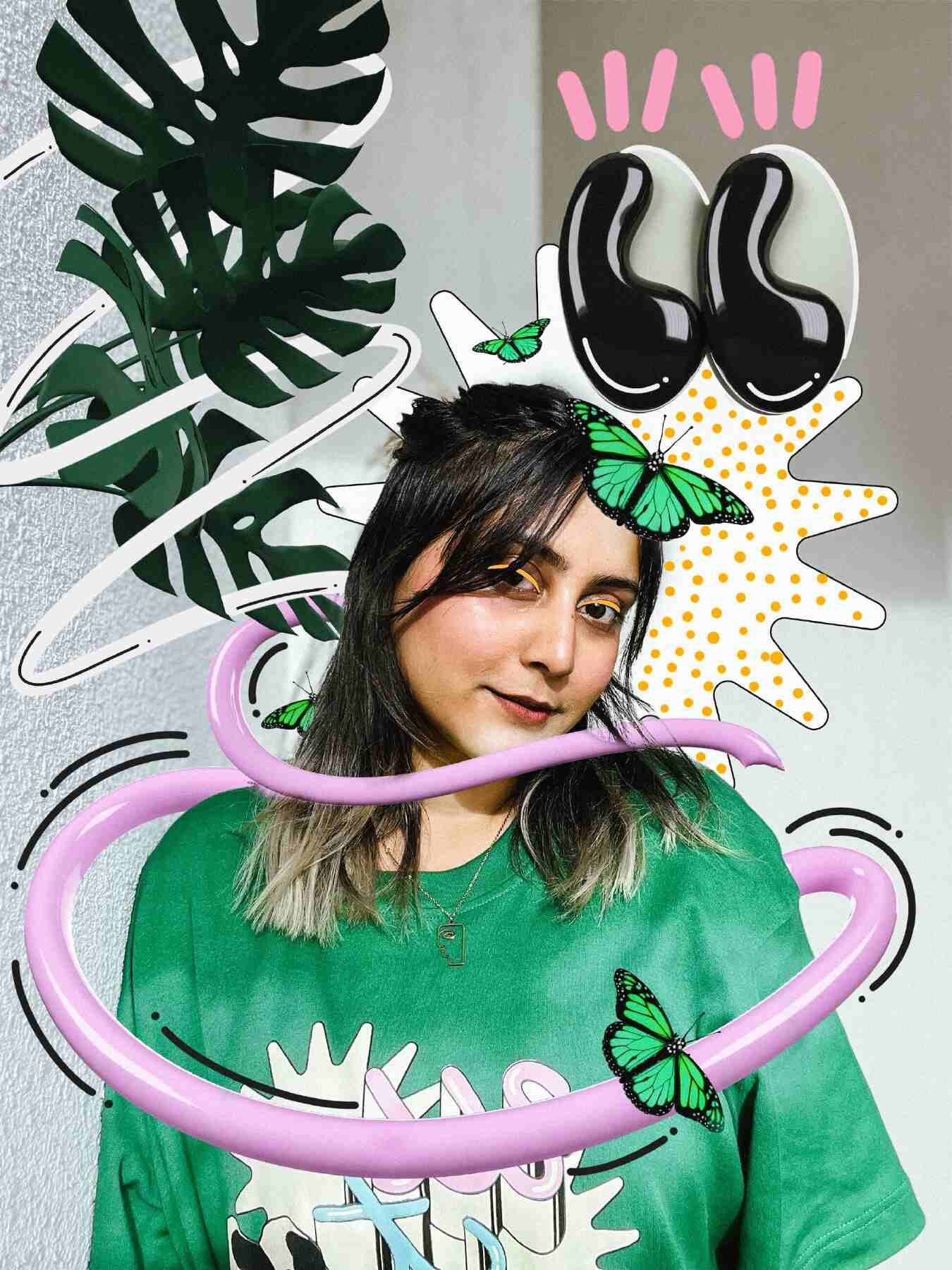 Despite working with different styles, her greatest inspiration and a common bond that binds the work she does in her daily life experiences. Tendolkar’s work is packed with lots of color and vibrancy. Interesting typographical work also forms the inspirational basis for form explorations. She says, “I’m a big fan of good typography that I can find even on a regular trip to the supermarket.”

Tendolkar admits that Instagram has played a central role in his journey as a designer. “Over the past 7-8 years, I have made great progress in my work. I collaborated with brands like Adobe, KFC, Kyoorius, made NFTs, had my t-shirt collection designed in collaboration with a streetwear brand, exhibited in well-known galleries for listed events and worked with several start-ups . It was surreal,” she says.

“A jack-of-all-trades masters none, but often better than a master in one”

Mumbai-based artist Anand Radhakrishnan always knew he wanted to tell stories. It was therefore only natural that he decided to move from science to art at the start of his career. Influenced by anime, heavy metal music and comics, he decided to delve deeper into the genre with a clear focus on French animation and comics and 60s American illustration. 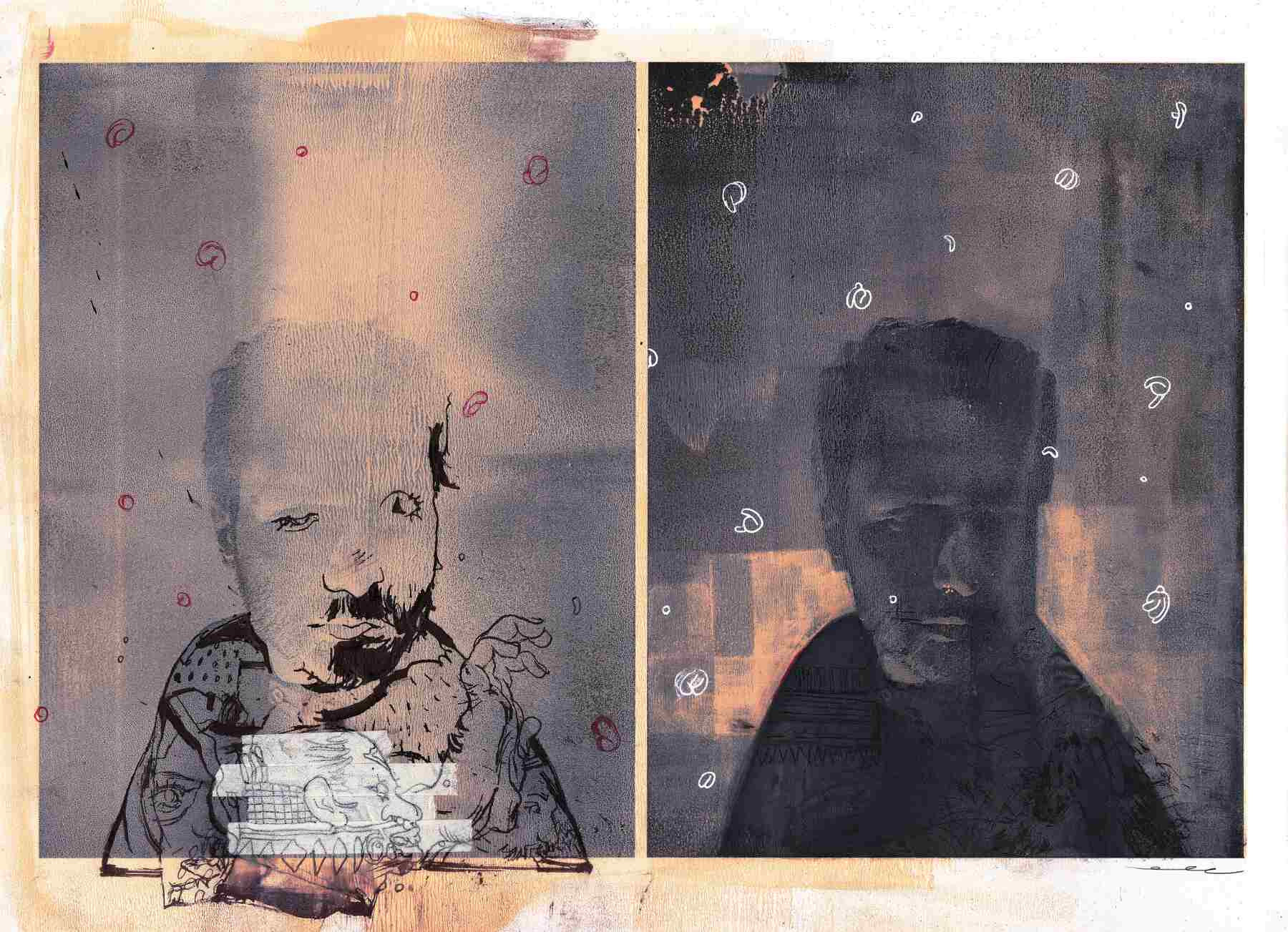 Comics appealed to him due to the economy of the medium, where his love for drawing and storytelling came together organically. “During the first years of my career, competence was more of a priority for me, and the work I did was more execution; that has changed recently. As I complete more projects, I start to design my own and focus more on authoring ideas and stories. I’m slowly pushing to work on my projects full time,” he says.

In 2021, Radhakrishnan became the first Indian to win a Will Eisner Award, popularly billed as the Oscars of comic books. His award came in the Best Painter/Multimedia Artist (Interior Art) category for his drawings for Ram V’s graphic novel Blue in Green, which deals with themes of ambition, pursuit of genius, depression and the loss of a loved one.

But he makes an interesting statement when asked where he finds inspiration for his art: “I no longer consciously look for inspiration; these days I try to focus on details. A particular way of dealing with the medium or an interesting way of dealing with a subject. I reference my work a lot and over time it has become an integral part of my image making and storytelling process. This SEO can range from going out and taking pictures of some type of foliage growing in an uncontrolled area during the monsoon season to someone sitting at the bus stop in an interesting pose. I also reference other creations, movies, and books when writing for a new project or drawing a new graphic novel, especially if I’m stuck with a specific problem,” he admits.

“I no longer consciously look for inspiration; these days I try to focus on details”

Twenty-four-year-old NIFT graduate and new-age textile artist Akash Patwal is committed to pushing the boundaries of what can be considered textiles, as well as bridging the gap between the textile medium and abstract art. “My mind likes to connect the dots and my eyes are good at noticing things that parallel my aesthetic,” he says. 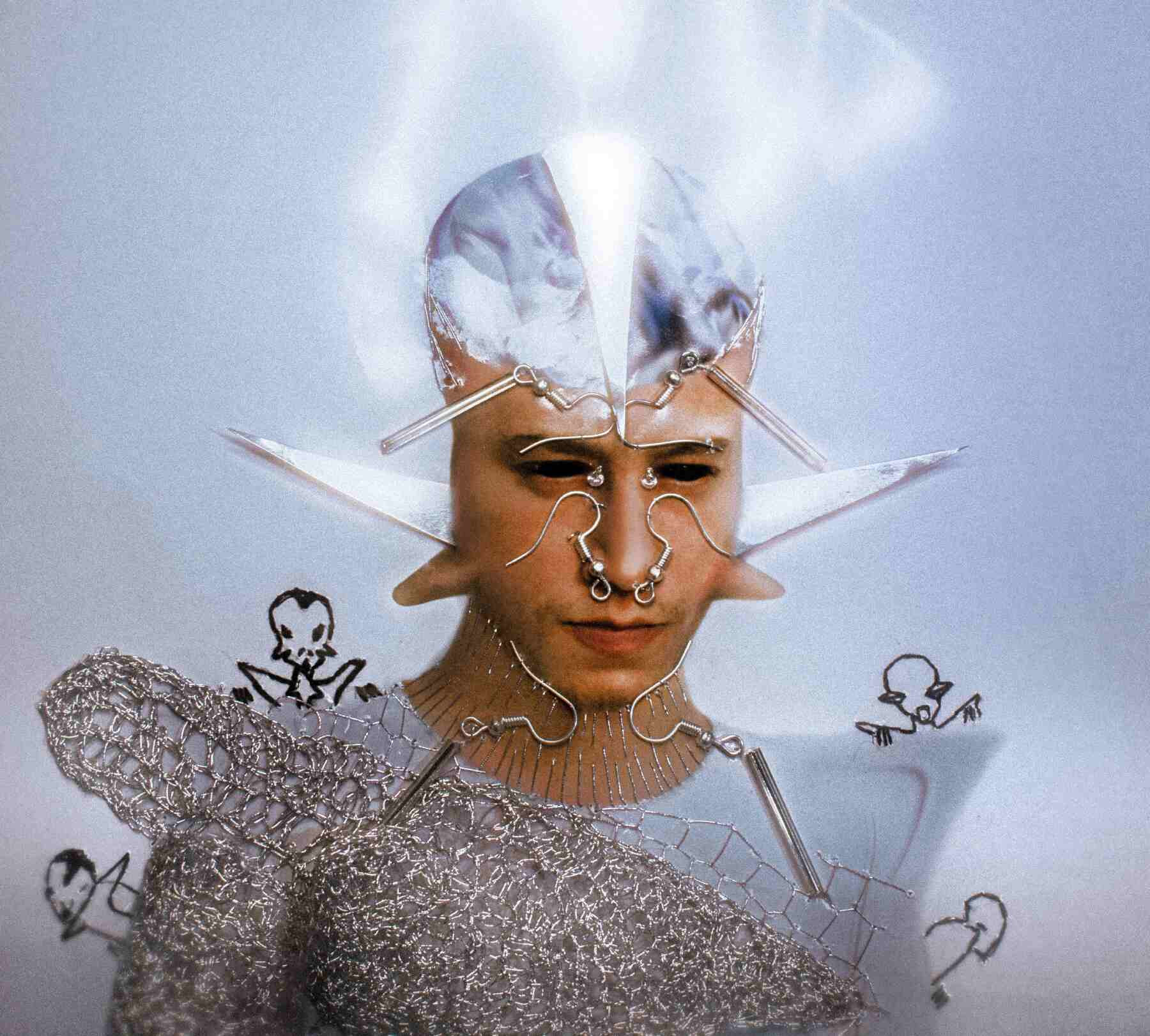 Patwal’s personal experiences and the experiences of those around him give direction to his work, while the visual feel of the everyday chaos engulfing him adds texture. “Trusting my unconscious and my mistakes gives my work more direction and uniqueness,” he says. Patwal believes in taking the usual a very unusual approach to create something new in the company’s vision. “The work I created for Grazia revolves around creating a cultural cyborg, combining digital and artisanal techniques; notice how zari yarn, which is traditionally used in fabrics like brocade and embroidery like zardozi, has been used to create a crochet knit upper body vest as well as digital body modifications,” he explains. -he.

Her Instagram account, Walking Vertical, features a heady mix of abstract forms, shapes, intricate details and colors, resulting in vibrant abstract images. “I constantly seek to create and question. I believe that surrounding myself with creative minds has pushed me towards perpetual evolution,” he says.