The jaguar figurine stands on a four-wheeled wooden platform, waiting to be pulled around the garden like an old child’s toy.

But there’s nothing miniature about this big cat, a masterfully crafted creature with dragon wings and a coiled serpent’s tail above a hedge of green leaves.

A stroll through the flower gardens of Cantigny Park in Wheaton becomes an encounter with alebrijes, surreal animal hybrids brought to life by six guest Mexican artists.

Alebrijes make you dream. A fish with legs and talons looks like it was taken out of a pond and onto a sandy beach in Cantigny. A two-headed dragon and other mythical beasts line the sidewalks on a kind of parade route through the park for a new exhibit,”Alebrijes: creatures from a dream world“, open today and until October.

For all their whimsy, alebrijes (pronounced ah-leh-bree-hehs) are labor-intensive works of art, often made of wire skeletons, covered in papier-mâché and layers of brightly colored paint. But no two alebrijes are the same.

Her jaguar bears her signature, “Miri Salgado”, and her vibrant style. A member of a husband-and-wife team in the Xochimilco neighborhood of Mexico City, Salgado has dedicated 17 years to the art of making monumental alebrijes, larger-than-life sculptures.

“It allows me to create whatever I want, whatever I can imagine,” she said. 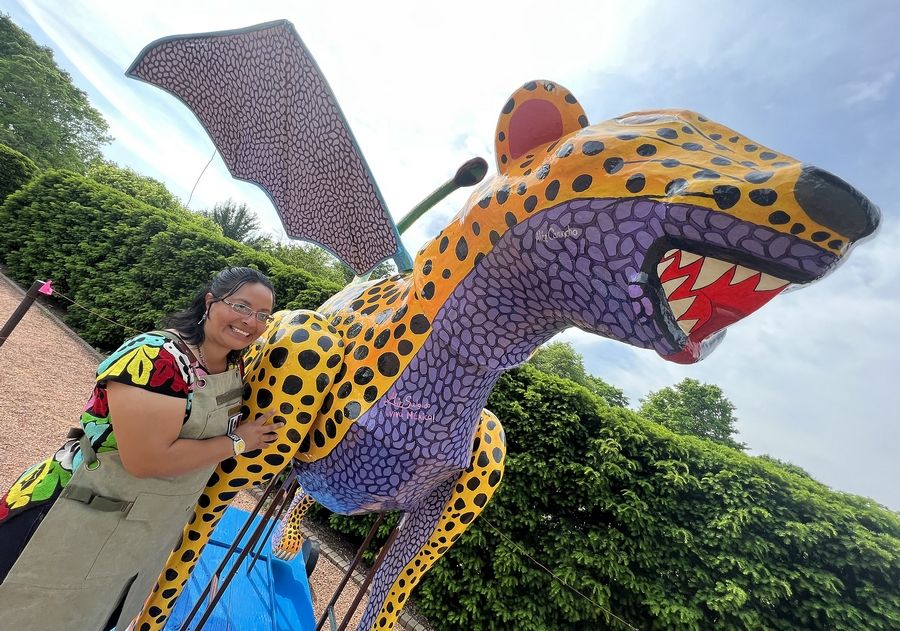 Artist Miriam Salgado Zamorano stands next to her alebrije in a garden in Cantigny Park in Wheaton.
– Mark Welsh | Personal photographer

The artists gave free rein to their imagination by creating nearly 50 alebrijes for “Creatures of a Dream World”. The largest are about 20 feet tall.

The six maestros – Salgado and her husband, Alejandro Camacho Barrera, as well as Alberto Moreno Fernández, Roberto Carlos Martinez, Edgar Israel Camargo Reyes and Arturo Zárate Ortiz – worked in their allotment gardens, in parks, in the streets, on the rooftops, wherever they could find space large enough to accommodate construction. The jaguar taken single-handedly by Salgado took two months to build.

“It’s so beautiful, the work and the know-how they put into it. They don’t even realize the incredible things they do with their hands and the number of hours they put into it”, said Fernando Ramirez, president and founder of the Mexican Cultural Center at DuPage. “And I think it’s our job to help bring them to life, to bring them to the community.”

Ramirez had the idea for an exhibition of alebrijes and approached Cantigny over a year ago to host it. It’s not just a celebration of Mexican folk art. Ramirez sees artists as ambassadors of cultural exchange.

“First, I want them to see Mexico reflected in these pieces,” Reyes said of his sculptures, painted intricately in almost fluorescent tones, for an audience in Cantigny. 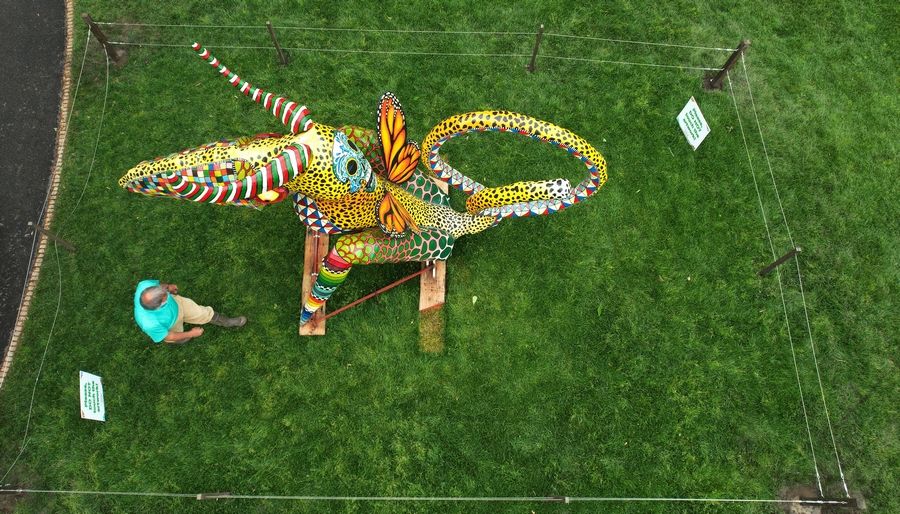 Todd Henderson, assistant director of horticulture, works around one of the alebrije creatures at Cantigny Park in Wheaton.
– Mark Welsh | Personal photographer

Pedro Linares López is credited with developing the art form in the 1930s and coining the term “alebrijes” after falling ill and drifting into a fever dream populated by otherworldly creatures. Like López, the artists presented in Cantigny specialize in the craft trade of cartonería.

The artists were recruited by the Mexican Cultural Center of DuPage and arrived in Cantigny in May. After the alebrijes arrived by truck at the park, the artists finished assembling them, touching up the paint and applying numerous coats of lacquer to protect them from rain and weather. You will see “¡Viva México!” painted on their carvings and a Mexican flag on their work aprons. 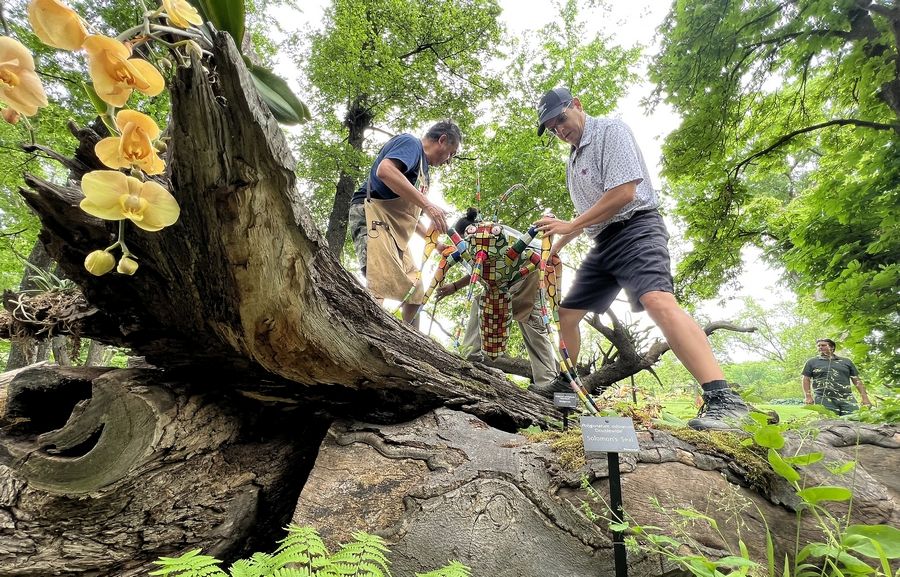 A mosquito sculpture by artist Arturo Zarate is positioned for display by Alejandro Camacho and Scott Witte, Director of Horticulture at Cantigny Park in Wheaton.
– Mark Welsh | Personal photographer

“We see this as a celebration of cultural diversity through art, and it’s a great message and aligns perfectly with our values, so it really is a perfect partnership,” said Cantigny’s chief executive. , Matt LaFond. “Additionally, it also allows us to attract a diverse new audience to the park and really expose them to all that Cantigny has to offer.”

As the expo officially opens today, organizers are planning a day-long celebration on June 12 with music, dancing and food as part of a summer-themed lineup. ‘alebrije. The McCormick Foundation, Cantigny’s parent organization, provided a grant to the Mexican Cultural Center at DuPage to help make “Creatures of a Dream World” a reality.

“We have programs, events, gardening classes, lectures, everything around the alebrije exhibit for the duration, not just the opening but throughout October,” LaFond said. 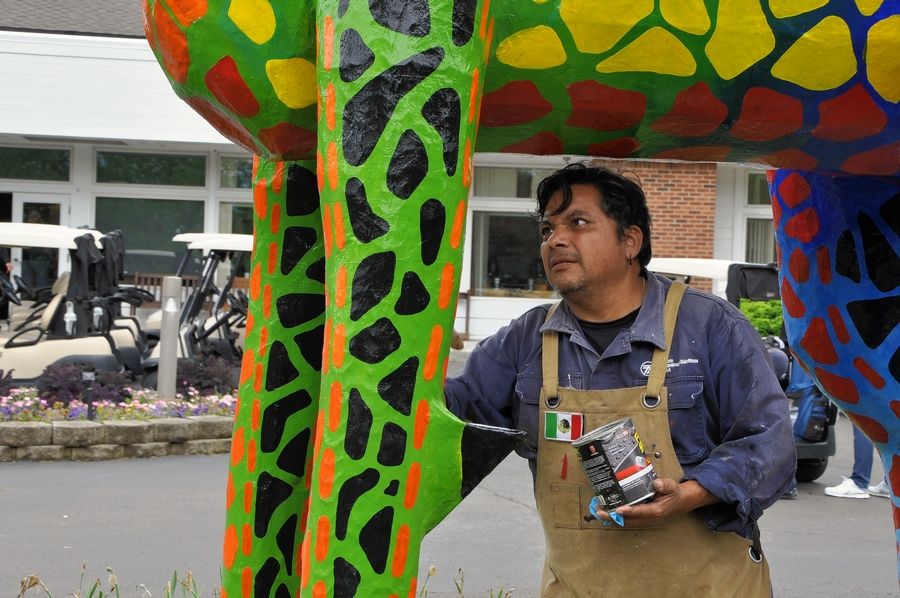 “Since I was a child, the first time I saw an alebrije, I fell in love with them,” said artist Edgar Israel Camargo Reyes.
– Courtesy of Parc Cantigny

The artists will stay at DuPage until the first week of July. This month they will work together on a group project – an alebrije octopus – taking place between an alley or avenue of trees in Cantigny.

“People can come and ask them questions about how they do this,” LaFond said.

Sometimes the “how” cannot be explained. Spontaneity is as much a part of the process as a brush.

“When you create a piece, you’re always going to put your emotions into it, when you’re sad, when you’re happy, or when you have a problem,” Salgado said. “These pieces were created with a lot of love, and a lot of work went into them. And overall, it reflects a lot of happiness when they were created.”

When one of his pieces, another winged creature, was first installed at the entrance to Cantigny, Salgado cried with happiness.

• Alicia Fabbre, editor of the Daily Herald, contributed to this report