NEW YORK (AP) — Pop artist Claes Oldenburg, who transformed the mundane into the monumental with his oversized sculptures of a baseball bat, clothespin and other objects, has died at 93.

Oldenburg died Monday morning in Manhattan, according to his daughter, Maartje Oldenburg. He had been in poor health since falling and breaking his hip a month ago.

Swedish-born Oldenburg was inspired by the sculptor’s abiding interest in form, the Dadaist’s revolutionary notion of bringing ready-made objects into the realm of art, and the ironic fascination and pop artist’s outlaw for lowbrow culture – reimagining ordinary objects in fantastical contexts.

Vehicles pass under a large binocular sculpture by Claes Oldenburg and Coosje van Bruggen at a former advertising agency in Venice, California. Photo by Nik Wheeler/Corbis via Getty Images

“I want your senses to become very attentive to their surroundings,” he told the Los Angeles Times in 1963.

“When I’m served a plate of food, I see shapes and forms, and sometimes I don’t know whether to eat the food or look at it,” he said. In May 2009, a 1976 Oldenburg sculpture, “Typewriter Eraser”, sold for a record $2.2 million at a post-war and contemporary art auction in New York.

Early in his career he was a key developer of vinyl “soft sculpture” – an alternative way to transform ordinary objects – and also helped invent the quintessential 1960s art event, the “Happening”. .

Among his most famous large sculptures are “Clothespin”, a 45ft steel clothespin installed near Philadelphia City Hall in 1976, and “Batcolumn”, a 100ft lattice steel baseball bat installed the following year in front of a federal office. building in Chicago.

“It’s always a matter of interpretation, but I tend to consider all of my work to be completely pure,” Oldenburg told the Chicago Tribune in 1977, shortly before “Batcolumn” was signed. “That’s the adventure: taking a highly impure object and seeing it as pure. It’s fun.

The placement of these sculptures showed how his monument-sized objects – while still causing much controversy – took their place in front of public and corporate buildings as the establishment ironically defended once-foreign art. .

Many of Oldenburg’s later works were produced in collaboration with his second wife, Coosje van Bruggen, a Dutch-born art historian, artist and critic, whom he married in 1977. The previous year she l helped install his 41-foot “Truelle I”. ” on the grounds of the Kroller-Muller Museum in Otterlo, the Netherlands. 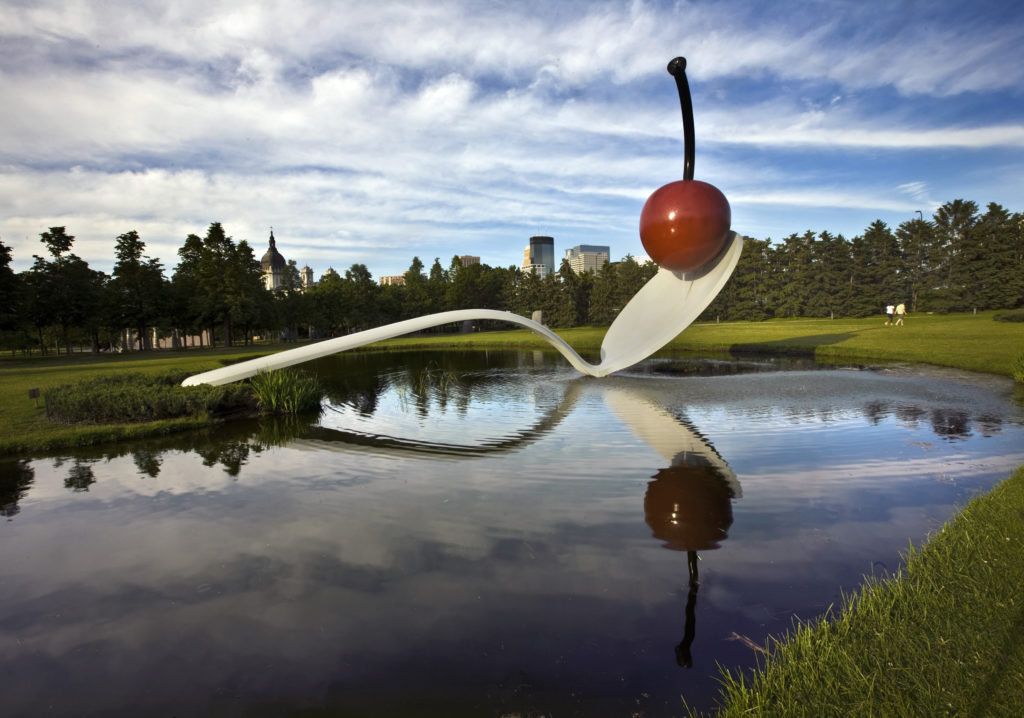 “Spoonbridge and Cherry” designed by Claes Oldenburg and Coosje van Bruggen at the Walker Art Center in Minneapolis. Photo by Tom Wallace/Star Tribune via Getty Images

Oldenburg’s first wife, Pat, also an artist, helped him during their marriage in the 1960s, sewing his soft sculptures.

Oldenburg’s first burst of publicity came in the early 1960s, when a type of performance art called the Happening began to appear in Manhattan’s artier neighborhoods.

A 1962 New York Times article described it as “extravagant entertainment more sophisticated than twisting, more psychological than a seance, and twice as maddening as a game of charades”.

An Oldenburg concoction, quoted in Michael Kirby’s 1965 book “Happenings,” juxtaposed a man in flippers quietly reciting Shakespeare, a trombonist playing “My Country ‘Tis of Thee,” a young woman laden with tools climbing on a ladder, a man shoveling sand from a cot, and other oddities, all in a six-minute segment.

“There is no story and the events apparently make no sense,” Oldenburg told The Times. “But there is a disorganized pattern that acquires definition over the course of a performance.” He said the sessions – unscripted but loosely planned in advance – should be a “cathartic experience for us as well as the audience”. 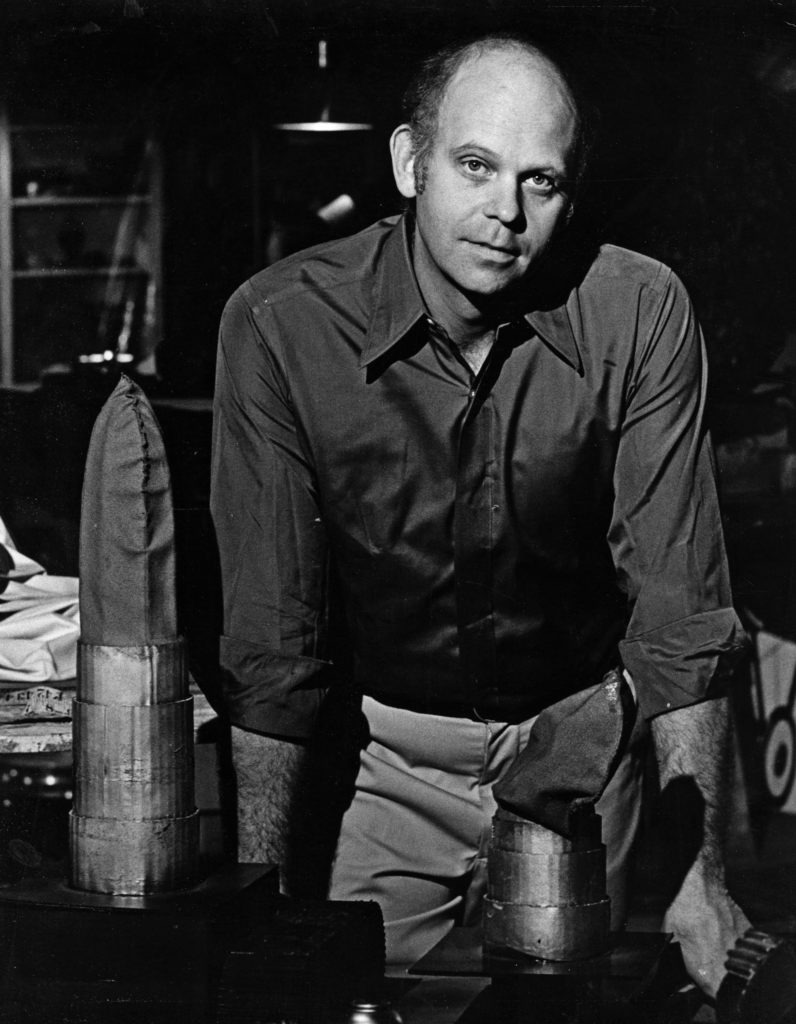 Oldenburg sculpture was also becoming known during this period, particularly those in which objects such as a telephone or an electric mixer were rendered in soft, bendable vinyl. “The phone is a very sexy shape,” Oldenburg told the Los Angeles Times.

One of his first large-scale works was “Lipstick (Ascending) on ​​Caterpillar Tracks”, which juxtaposed large lipstick on caterpillars resembling those that propel army tanks. The original – with its underlying suggestion of “make love (lipstick) not war (tanks)” – was commissioned by students and professors and installed at Yale University in 1969.

The original version deteriorated and was replaced by a steel, aluminum, and fiberglass version at another location on the Yale campus in 1974.

Oldenburg’s 45-foot steel “clothespin” was installed in 1976 outside Philadelphia City Hall. It evokes “Le Baiser” by Constantin Brancusi in 1908, a semi-abstract representation of an almost identical man and woman embracing from one eyeball to the other. “Clothespin” looks like the ordinary household object, but its two halves face each other in the manner of Brancusi’s lovers.

Chicago’s “Batcolumn” was funded by the federal government under a program to include a budget for artwork whenever a major federal building was constructed. It took place not far from the famous Picasso sculpture in Chicago, inaugurated in 1967.

“Batcolumn,” Oldenburg told the Tribune, “attempts to be as non-decorative as possible – simple, structural and direct. This, I think, is also part of Chicago: a very factual and realistic object. The last thing, however , was to have it against the sky, that’s what it was made for.

He had considered doing it in red, but “the color would just distract from the linear effect. Now, the more buildings they demolish here, the better. 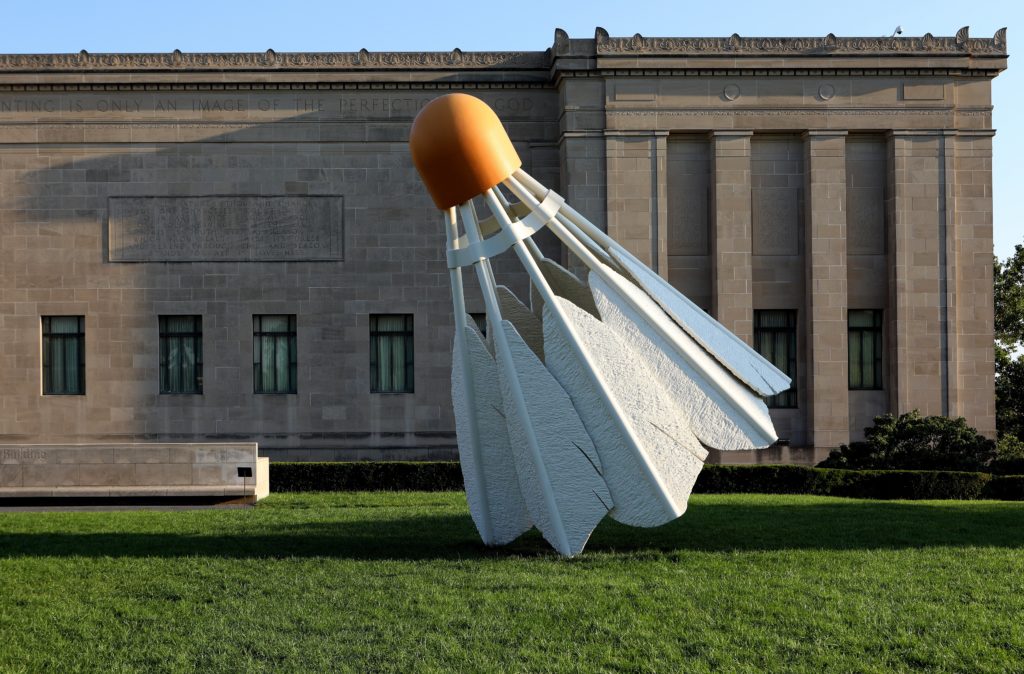 The ‘Shuttlecocks’ sculpture by Claes Oldenburg and Coosje van Bruggen stands outside the Nelson-Atkins Museum of Art in Kansas City, Missouri in 2017. Photo by Raymond Boyd/Getty Images

Not all Chicagoans were happy. Around the same time as the sympathetic Tribune interview, another Tribune writer, architecture critic Paul Gapp, decried the trend towards “silly public sculpture” and called Oldenburg a “veteran of man and poseur who has long since convinced the art establishment that he was to be taken seriously. »

Other monumental Oldenburg projects include: “Crusoe Umbrella,” for the Civic Center in Des Moines, Iowa, completed in 1979; “Flashlight”, 1981, University of Las Vegas; and “Tumbling Tacks”, Oslo, 2009.

Oldenburg was born in 1929 in Stockholm, Sweden, the son of a diplomat. But young Claes (pronounced klahs) spent much of his childhood in Chicago, where his father served as Swedish consul general for many years. Oldenburg eventually became an American citizen.

As a young man, he studied at Yale and the Art Institute of Chicago and worked for a time at the City News Bureau in Chicago. He settled in New York in the late 1950s, but also occasionally lived in France and California.