Kim Young-won, a seasoned sculptor best known to the public for the huge statue of King Sejong the Great (1397-1450) that stands in Gwanghwamun Square in central Seoul, is now showing works quite different from the monumental sculpture in his current personal exhibition. .

The exhibition titled “Art of Qiosmosis,” which runs until October 10 at Chung Jark Gallery in southern Seoul, features the 75-year-old artist’s new abstract paintings that show the flow of qi, or force vital supposed to be part of all living beings. entity of traditional East Asian medicine.

“I have been studying qigong since 1990, when my health seriously deteriorated while working on my ‘Gravity Nongravity’ series of sculptures,” Kim told reporters last week at the gallery. Qigong is the practice of cultivating and balancing qi through body movement, breathing, and meditation. “I first applied qigong to my art at the São Paulo Art Biennial in 1994.” 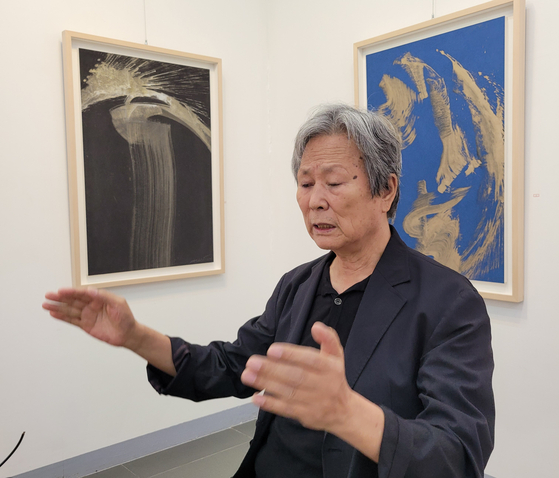 In a performance at the biennale, the artist danced around a mud-covered pillar, while letting himself fall in a stream of his qi. When he almost went into a trance, he scraped the pillar into a kind of sculpture. The performance caused a sensation during the biennale, according to the artist.

Encouraged by the response, the artist experimented with paintings he makes with a single brushstroke, while letting his movement fall into the flow of qi. Yet he continued to focus on sculptures for decades and it was since 2018 that he started focusing on qi paintings.

“My works express the energy and vitality that I release from my whole body when my body falls into a state closest to nature,” said the artist.