Named Play Contract, the structures were designed to be “informed by children’s thoughts about play”.

Created for a Danish organization children’s capitaleach of the five small marble structures incorporate covered areas, steps and pathways to reframe how adults and children interact with the surrounding landscape.

“More [playgrounds] are designed and constructed based on adults’ notions of children and how they should behave,” explained KWY.studio.

“With Play Contract, the balance of power is reversed, and now it’s the children’s turn to imagine a playful space for them and for the grown-ups”, he continues.

The play structures were designed in a workshop where 122 school children used pink Lego bricks to create models.

These models were then analyzed to determine a range of shapes, such as gate, amphitheater and tower, as well as a range of proposed uses, such as climbing, swinging, sitting, sliding and jumping, that informed the final designs.

“The process was to generate a single result from the children’s models while retaining everyone’s ideas,” the practice said.

“All patterns have been carefully traced and multiple combinations have been layered and intersected in new configurations.”

“In the end, it’s as if every pattern of every child is there, making up a city, parts of which have been carefully uncovered for what must be a new, eternal future,” he continued. 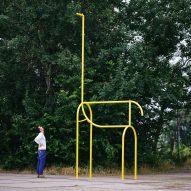 The studio built the five pink marble structures to achieve a sense of “timelessness”, which was intended to evoke a sense of curiosity around who designed the structures and why.

“Visits to quarries and workshops provided insight into how the material was to be used, retaining both natural traces and man-made processing imperfections,” the studio said.

“Finishings have been kept to a minimum while much of the history of each of these impressive large boulders has been preserved.”

Other recent playground and playground designs include a playground in Amsterdam with minimalist animal sculptures by toy designer Luca Boscardin, and a playground in New York that features wave breakers in reused concrete painted sky blue.