Over 500 school children worked alongside artists from Radical Horizons: The Art of Burning Man in Chatsworth to create and build three huge new interactive sculptures as part of the UK exhibition.

These latest additions to Radical Horizons make a total of twelve works spread over a site over a mile long and half a mile wide and set in 1,000 acres of free-access parkland surrounding the Derbyshire estate house. .

Radical Horizons: The Art of Burning Man will run until October 1, when it will close with the solemn burning of the new Relevé sculpture symbolizing the “letting go” of the exhibition. The ceremony follows the tradition established by the global Burning Man event in Nevada.

A nine-metre-tall structure built mostly of wood by artist Rebekah Waites with hundreds of local school children, Relevé was inspired by Derbyshire folklore that says a Bronze Age stone circle near Chatsworth was formed from the remains of nine ladies turned to stone for Sabbath dancing.

Relevé not only pays homage to the nine ladies, but also celebrates the rebellious spirit of dance, music and art. By questioning the folklore behind this archaeological site, Relevé attempts to rewrite history and free women from their eternal immobility. Nine twisted wooden structures, finely decorated with a facade laced with cords and strings, dance around each other.

Over the past few months, school children and young people from Derbyshire and Sheffield have collected materials and helped build the three new sculptures, mirroring the process in Nevada which sees teams of volunteers come together in the desert to create new works of art. Burning Man is an arts and cultural event that usually takes place every year in the Black Rock Desert in Nevada, USA.

Statement by Rebekah Waites with Watercliffe Community Primary, Sheffield, 240 children; St Anne’s Primary, Baslow, 17; Stanton at Peak Primary, 42; Rowsley Primary, 29: Relevé was inspired by the Nine Ladies Stone Circle, a Bronze Age archaeological site at Stanton Moore near Chatsworth and this sculpture will burn at the end of the exhibition as a celebratory finale.

Coralee by Dana Albany, Heather Henderson, Flash Hopkins, Kathy Richardson with Spire Junior School (Chesterfield): The sculpture takes the form of a mermaid – inspired by the folklore of the mermaid’s pool, located just below Kinder Scout in the Dark Peak – and was constructed with everyday metal and glass donated by Chatsworth, its staff and the local community. Look closely to spot spoons, bolts, keys, chandeliers and bicycle chains. 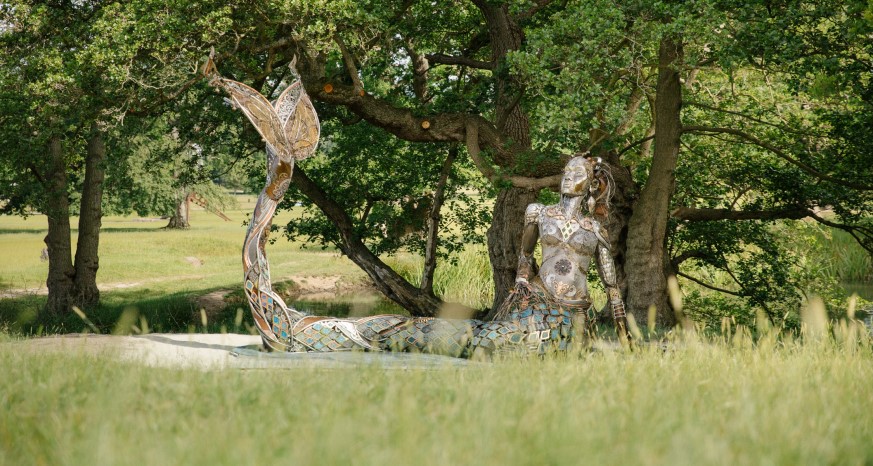 Elysian Towers by Shrine (also known as Brent Allen Spears) with Derbyshire Virtual School: Shrine worked with young adults from Derbyshire Virtual School to create Elysian Towers. The artwork is made from ‘waste’ and objects found locally by the participants themselves, using recycled glass donated by Ardagh Glass and plastic bottles stacked in towers, celebrating the joy of the unknown and creating a monument dedicated to the making of the precious non-precious. 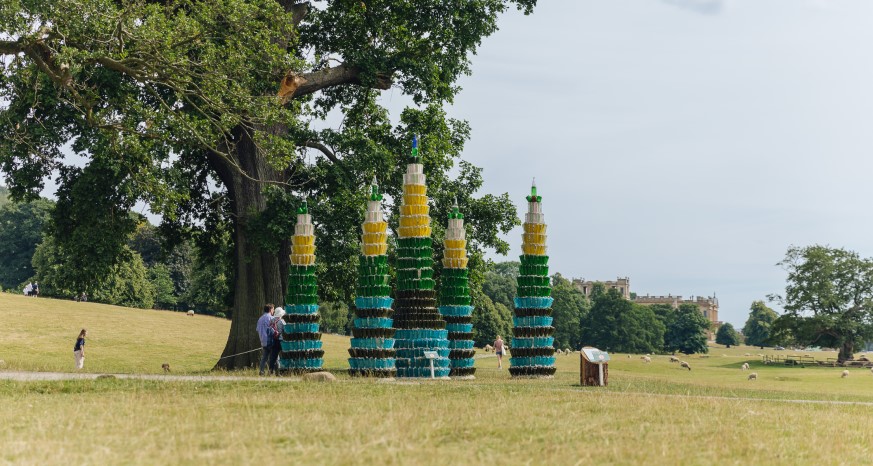 These participatory new builds between artists and local children and young people were organized by Chatsworth’s in-house learning and engagement team. Focusing on hands-on artistic engagement sessions linked to the school curriculum, her work is designed to enhance visual literacy and develop technical and creative skills, while the outdoor learning sessions include multi-sensory activities to help develop understanding of the environment.

Kerry Fernandez, Arts and Engagement Manager: “It was a wonderful experience for many children and young people who had never visited Chatsworth before. They had a rare opportunity to engage with art and contemporary artists, while learning new skills and techniques.We hope this will lead them into a lifelong engagement with the arts that can open their eyes to new ways of seeing things.

Chatsworth supports the town’s marketing and economic growth through Chesterfield Champions, a network of over 200 organizations across Chesterfield and North Derbyshire.