World Embroidery Day has just been celebrated on July 30, so now is the perfect time to visit. “A vision of art and faith.” This exhibition focuses on the Italian artist Ezio Anichini, who lived from 1886 to 1948. The highlights of the exhibition are two intricate embroideries inspired by Anichini’s illustrations which are on loan from the Royal School of Needlework in London. In addition to these exquisite needlework, the UD exhibition also includes a wide variety of other works of art by Anichini – religious and secular – in the Art Nouveau style.

On display in Columbus is ”Raphael—The Power of Renaissance Imagery: The Dresden Tapestries and Their Impact. » They are enormous works, said to have been woven from painted compositions created by the Renaissance master Raphael in 1515. These paintings were models for the tapestries of the Acts of the Apostles commissioned by Leo X for the Sistine Chapel. The exhibition, on loan from the Old Masters Picture Gallery of the Gemäldegalerie Alte Meister (GAM) in Dresden, Germany, also includes 50 other works of art – drawings, prints and sculptures – which demonstrate the influence this important work has had on generations of other artists over four centuries.

A few years ago, the staff at the Marian Library received an intriguing phone call from John Shaffer, retired director of arts programming at the State University of New York, Oswego.

“He wanted to let us know that we had a book in our collection illustrated by an artist that no one really knew much about,” library director Sarah Burke Cahalan recalled. The book was a rare copy of Ezio Anichini’s complete set of images. “They were inspired by The Litany of Loreto, a medieval prayer that lists the titles of the Virgin Mary,” Cahalan explains. “This prayer inspired Anichini to produce an illustration of each title, which he first published in 1912.” His illustrated version of the litany was so popular that it was reprinted several times.

The UD exhibition is the first time Anichini-inspired embroideries have been exhibited outside of England. CONTRIBUTED

The UD exhibition is the first time Anichini-inspired embroideries have been exhibited outside of England. CONTRIBUTED

Shaffer, who lives in Shepherdstown, West Virginia, was captivated by Anichini’s drawing style after seeing illustrations the artist had done for the “Divine Comedy of Dante Alighieri.”

To his surprise, Shaffer found very little information about the artist. “What started as an effort to satisfy my curiosity quickly became a hobby,” he says now. “Through old Italian magazines and books and a growing network of very helpful people, the full picture of Anichini’s remarkable career began to emerge. Although his work was never sold by galleries, it was known to thousands through the popular press, postcards He pursued a career as an artist during one of the most tumultuous periods in Italian history, including two world wars and decades of upheaval social and political.

Shaffer set about buying all the work of Anichini he could find. Part of his collection is now on display at the University of Dayton. “It’s hard to choose from Anichini’s many creative endeavors, but I think his illustrations for children’s books were closest to his heart,” Shaffer says. “His drawings for the Italian editions of Hans Christian Andersen, Lewis Carroll and JM Barrie are incredibly beautiful.”

The icing on the cake came when Shaffer discovered that the Royal School of Needlework in London had 12 tapestries based on Anichini’s rare book illustrations and agreed to loan two of them to Dayton.

John Shaffer is co-curator of “A Vision of Art and Faith” currently on view at the Marian Library. He collects the works of Ezio Anichini. CONTRIBUTED 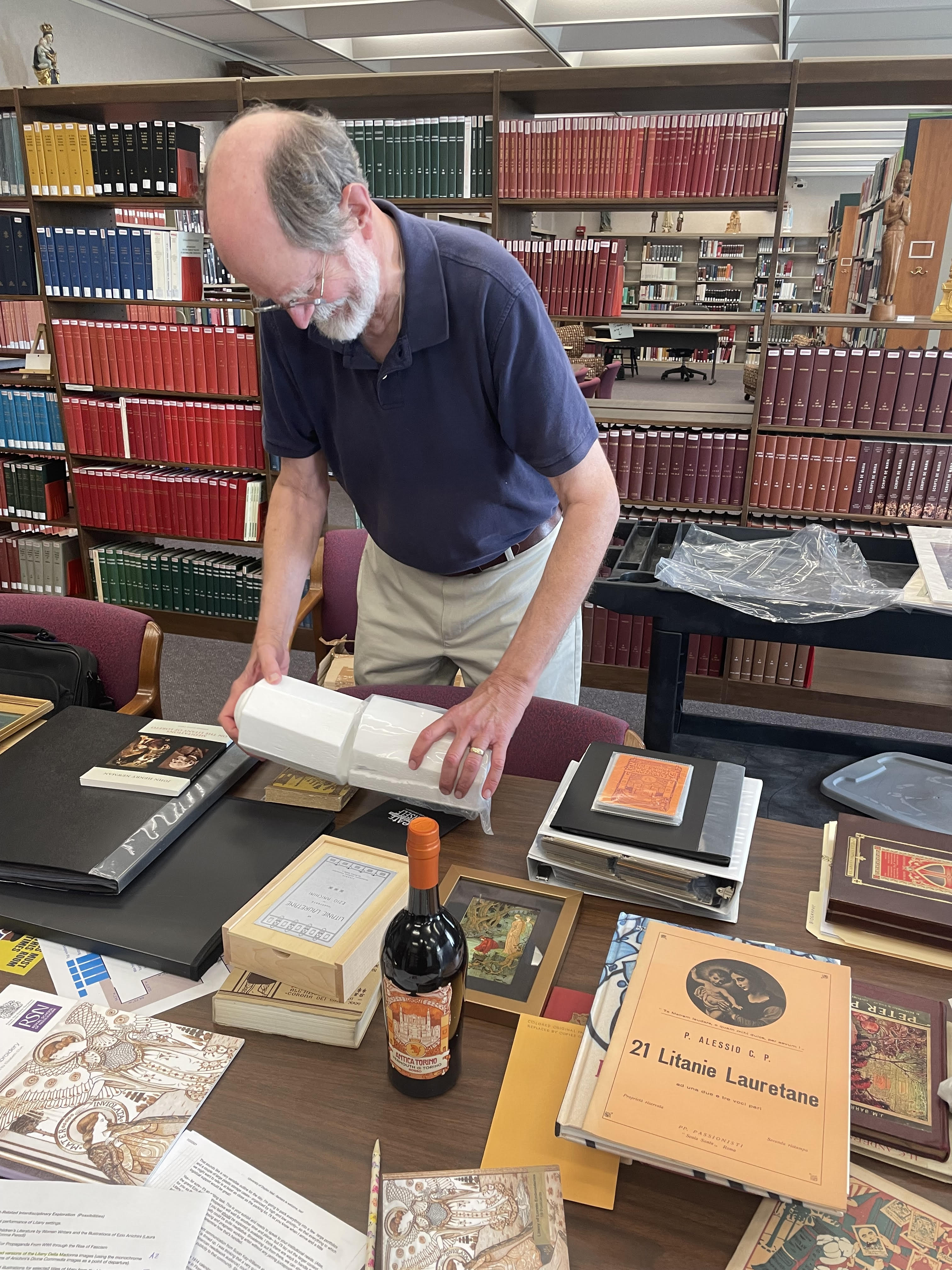 John Shaffer is co-curator of “A Vision of Art and Faith” currently on view at the Marian Library. He collects the works of Ezio Anichini. CONTRIBUTED

“Although they are relatively small in size, the Head of the Royal School of Needlework, Susan Kay-Williams, estimates that thousands of hours of expert-level hand embroidery have gone into creating the 12 framed panels. that once adorned the walls of an English convent,” Cahalan says. “No one knows the identity of the craftsman who created them.” When the library hosted an embroidery webinar featuring Kay-Williams, 600 people from all over the world have signed up. Since the expo opened, needlecraft enthusiasts from as far away as Indiana, Kansas and West Virginia have made the trip to Dayton to see them.

One of the visitors was Mary Corbett from Kansas who runs a popular embroidery website and blog. “These embroideries have me absorbed, fascinated and infatuated since I first heard of them,” Corbett wrote on his website. “My greatest desire was to see them up close – to see the details pieces you can only see in person.

Corbett says it was satisfying to get up close to the panels and see all the little details that bring these embroideries to life. “The layering of gold over the silk embroidery, the use of bright white threads here and there to add a ‘glitter’ and light feel to the pieces, the sheen of the silk, the sheen of the gold – you can just ‘I can’t see it all in pictures,’ she wrote, adding that she could have spent hours looking at every tiny millimeter of each piece and not get tired of what she saw.

Cahalan says the digital version of the 1931 book version of The Litanies of Loreto, in the collection of the Marian Library, has been downloaded over 3,200 times: https://ecommons.udayton.edu/ul_rare_books/5/

The tapestries exhibited in Columbus depict episodes from the lives of Saints Peter and Paul. Originally intended to reinforce the authority of the papacy, they tell the story of the founding of Christianity and the spread of its message throughout the Roman Empire.

While we generally think of a “cartoon” as a humorous drawing, in art history it can also refer to a large-scale preparatory drawing for a fresco, oil painting, or tapestry.

The Dresden tapestries were woven in England in the 17th century at the Mortlake Tapestry manufactory and are one of many sets said to have been woven from Raphael’s cartoons. His work is considered by many to be one of the most influential works in the history of Western European art. Raphael’s painted compositions are represented in the exhibition by two life-size facsimiles, created specifically for Dresden and Columbus.

Carole Genshaft, general curator at the CMA, says Raphael, who only lived to be 37, was a cult figure and superstar in his day. “He was well known and appreciated, not only as a painter, but also as an architect and as a supervisor of archaeological excavations in Rome, so you will see many references to ancient art in his work. His work inspired generations of artists who followed. 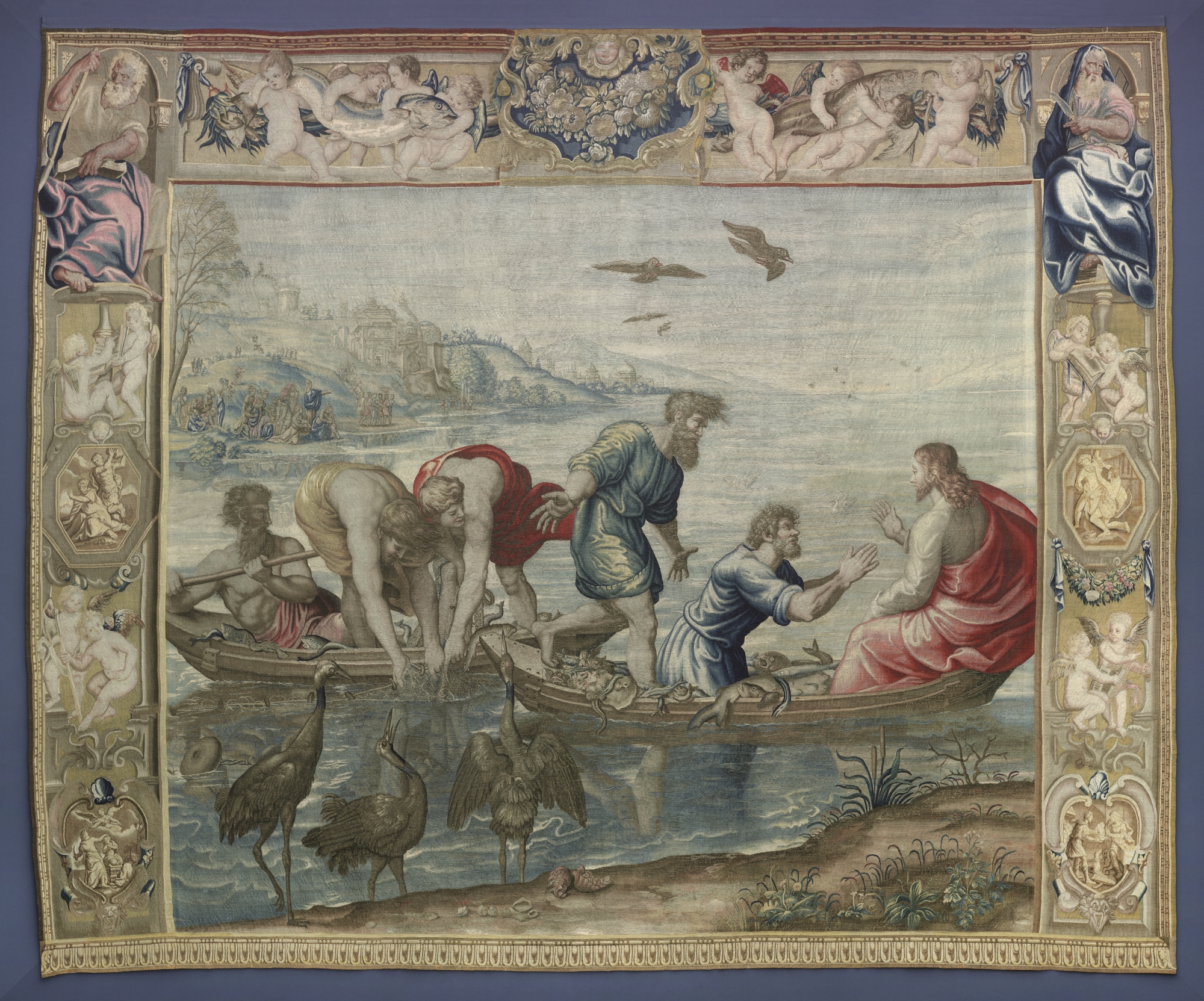 It is estimated, says Genshaft, that the weaving of the tapestries was done by four to six men working on each loom, with up to 15 looms in all. It can take a year and a half to produce a tapestry. “The cartons – or copies of cartons – were cut into strips which were placed under the looms and served as guides for the weavers.

She says the important thing about the tapestries is that they were status symbols. “Tapestries were more valuable than paintings at this time and were held in high esteem. They were used by religious leaders and also by royalty in castles and large estates.

Genshaft says the designs are the most stunning. “Raphael’s designs altered the development of tapestries, incorporating the illusion of real space with landscapes and painting-like architecture in the background. They are a departure from earlier tapestries which were filled with decorative detail. They really give us a glimpse into the world of the High Renaissance where art was so important both religiously and politically.

John Shaffer, co-curator of ‘A Vision of Art and Faith,’ stands near the start of the exhibit at UD. CONTRIBUTED 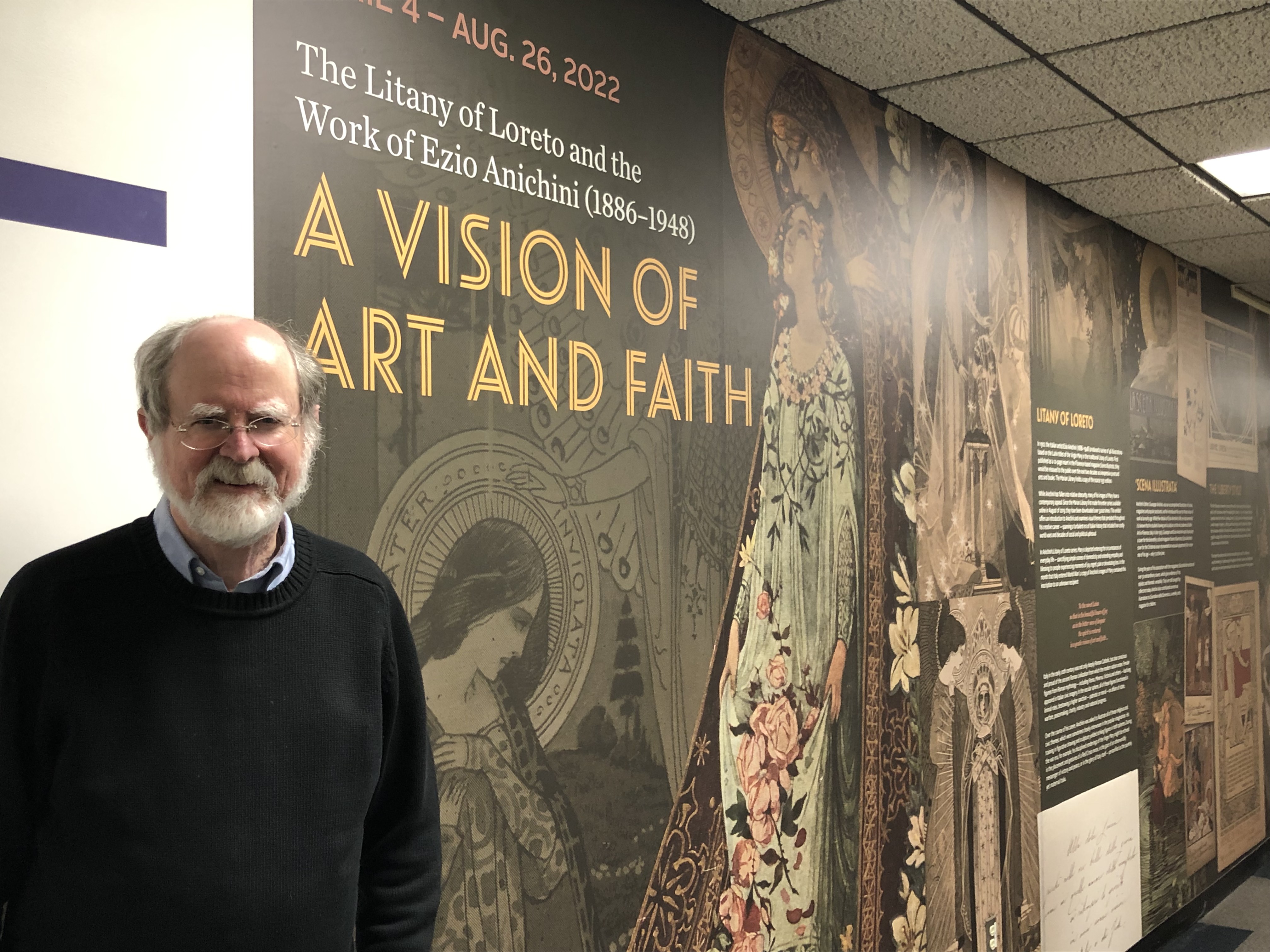 John Shaffer, co-curator of ‘A Vision of Art and Faith,’ stands near the start of the exhibit at UD. CONTRIBUTED

HOW TO GET THERE

What: “A Vision of Art and Faith: Loreto’s Litanies and the Work of Ezio Anichini.”

Where: The Marian Library on the 7th floor of the Roesch Library, University of Dayton

Car park: If you come from Monday to Friday, a parking pass is required. For a free parking pass, walk through the main campus entrance on Stewart Street just east of Brown Street and follow the signs for visitor parking. Stop at the Visitor Center and ask for a parking pass for Lot B, which is closest to the main library entrance.

How to get there:

What: “Raphael—The Power of Renaissance Imagery: The Dresden Tapestries and Their Impact »

Admission: $18 for adults, $9 for seniors (60+), students (18+) and children (4-17), free for members and children 3 and under. Special entrance to the exhibition Raphael—The Power of Renaissance Imagery: The Dresden Tapestries and Their Impact is an additional $10. Admission is discounted on Thursday evenings; general admission is $5 on Thursdays from 5-9 p.m. and special exhibit admission on Thursday nights is $5. General admission is free for everyone on Sunday. If you are a member of the Dayton Art Institute, regular admission to the museum will be waived.

Visit columbusmuseum.org for tickets and information on lectures and conversations presented by scholars and curators.